Today I want to take a look at a quite complex subject, which is whether the on-camera monitors are useful for the hyperlapse. As you probably know, I’m a Feelworld Master brand ambasador, so I’m testing their products for some time now. As my work mostly focuses on hyperlapse, in this post I’ll try to answer the question from the title: is the external monitor useful for a hyperlapser?

I’m the Feelworld Master brand ambassador, but this is not a sponsored article. All the opinions here are my honest thoughts. However I’ll be talking only about Feelworld Master monitor, as it’s the only one I’ve tested.

Currently I’m using Feelworld Master MA5 monitor. Why I think it is important what kind of monitor I’m using? Each monitor has it’s specification. This one has two qualities, that affect my judgement: 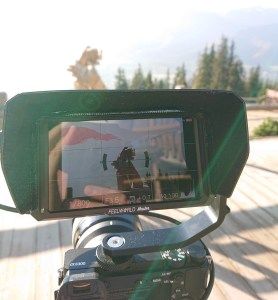 Why I think those two things are very important? Because on-camera monitor is NOT a must have for a hyperlapser. If someone would tell you, that you NEED a monitor to be a hyperlapser, it’s a lie (however I haven’t heard yet such opinions). It’s just an accessory, that stays in your bag waiting for a good occasion to use it. At least for me 😉

First of all, let’s explain some technicalities. If you’ve tried timelapsing (or hyperlapsing, maybe shoot stop motion) with an external monitor, you’ve probably noticed, that the quality of the image displayed on the monitor is different when switching between photo and video mode in camera. The reason of that is not the monitor, but the camera. DSLR and mirrorless cameras even though they sent full HD  or even 4K in video mode through HDMI port, they limit the resolution when in photo mode (which you use for timelapse).   The bigger the monitor, the bigger the difference. On 5″ monitor the difference is not that big, however you’re not seeing the full HD image.

As a hyperlapser, I was always thinking of getting an external monitor to try how it works for hyperlapse, but I always had more important things to buy. A year ago I decided to back a kickstarter project of LukiLink – it was a device, that lets you connect the smartphone to your camera and use it as an external monitor (with fullHD image). The idea seems pretty cool, but when I finally got it, it turns up to be useless. Mostly because of the size – I need to mount somewhere both the device (which turns up to be much bigger than in first project) and the phone. The second thing was, that at the end they didn’t develop their own app for it – you’ve got to use 3rd party apps. And this sucks. It took too much time to set it up. I tried to use it once in the field, to record the camera screen for Timelapse Course, as it has that option. But the image freezes from time to time and it wasn’t always recording when I hit Record (and the app was paid…). It’s not that I say it because of my cooperation with Feelworld – I got the Lukilink before I got the monitor from them. But it’s how Kickstarter works – you never know what you’ll get 😉 In the similar time I ordered there a mini cable cam system, I received it recently and it seems great 🙂

Sorry for this little offtopic. I’m back to hyperlapse now. So, you can use monitor for every shot, but there are some shots, that would be hard to pull off without it. One of the examples is on the picture below. Director asked me to shoot a hyperlapse from as high as I can. This is fully extended tripod with a gimbal on it. The camera was over 2 meters above the ground. I’d never shoot a hyperlapse with a tripod extended this much, but I knew it would be hard to see the in-camera screen. I had the monitor in my backpack, so I just mounted it on the tripod and I could very precisely position the camera in each tripod position.

Of course it’s not the only way to do that, I could connect my phone to the camera and use the Sony app to see what’s on the screen and take pictures (and I would do that if I hadn’t have the monitor). The difference is of course in the image quality. As I said, in the photo mode it’s a little worse than in the video on the monitor, but it’s still way better than on the phone. The second thing is latency – it’s way easier to position the camera precisely with a very short response speed.

The second example is the ending shot for my film Explore Poland.  If you haven’t seen the video: it was a slider vertigo shot of self-carving sculpture. It was shot on a slider, manually moving the carriage and the zoom ring. Vertigo shots are always hard to pull off. I was moving the camera backwards from time to time. As the camera was further from the object, I was zooming in the lens to match the sculpture position with the previous shot. As always I used the grid on the screen to do it. The sun was very harsh that day and it would be very hard to position it using the camera screen. Again: possible, but hard. Besides the focal length I had to adjust the focus during the shot (as I was changing the distance to the sculpture). It was also way easier with the monitor (don’t use AF in such situations).

In both situations described above I didn’t know I’d need to use the monitor. I just had it in my backpack, waiting for the right occasion.

So, in my opinion the advantages are:

These are two main advantages for me. I could also say something about exposure and focusing, but these are not the main reasons I would buy a monitor for. Shooting a hyperlapse in RAW doesn’t require a perfect exposure. And of course it’s great to focus easier, but again – it’s not the main advantage, but a cool addition if you already have a monitor.

New camera angles are very specific situations, but the precision is something that you can benefit in every shot. Of course there are harder and easier shots, but if you have ever shot a hyperlapse that was extremely hard to stabilize, then you know it’s good to spend a little more time on location to save a lot of the time in post production. And the bigger and higher resolution screen you have, the more precisely you will position the camera between each shot.

What’s up with those grids?

There is one thing that I have to mention when it comes to using a Sony camera with the external monitor. My Sony a6300 can show on the monitor everything you have on the screen besides the in camera grid, which is a little weird. Of course we have the grid in the monitor, but it’s just the rule of thirds grid, and for hyperlapses I use mostly square grid (with the vertical line in the center of the frame). For example in Panasonic GH4 there isn’t such problem, it displays everything. I’m able to hyperlapse with it using different things to aim the fixed point – the center marker from the monitor and the parts of the leveler from the camera. I’m in contact with Feelworld Master, asking them to add more types of grids to the monitor. Hopefully it will be available in the future 🙂

As you already know, I think that an external monitor is a useful companion for a hyperlapser, but not something neccessary. For sure it won’t be your first thing to buy, but if you have some spare cash – why not! Here come the advantages of the MA5 I’ve listed at the beginning – it’s cheap and lightweight. It can lay in your backpack and wait for the shot that needs it, or you can use it every time.

I hope you find this article useful. If you want to learn more about the monitor I’m using, check out the review HERE.

Be More Efficient With Timelapse Post-Production – My Timelapse Workflow

Are you too lazy for timelapse? Q&A VIDEO